Woah!  Has it really been 2.5 months since my last post!  Time flies when life gets busy doesn’t it?  So much has been going on since my last post.  In October we celebrated Gavin’s first birthday, my 31st birthday, Tom’s 36th birthday, and we had our 3 year wedding anniversary.  Even my blog had a birthday!  I’ve been writing on here for three years now! 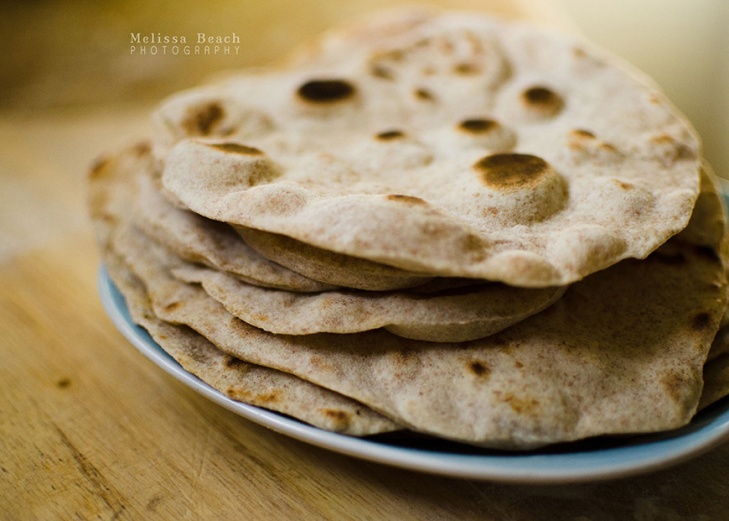 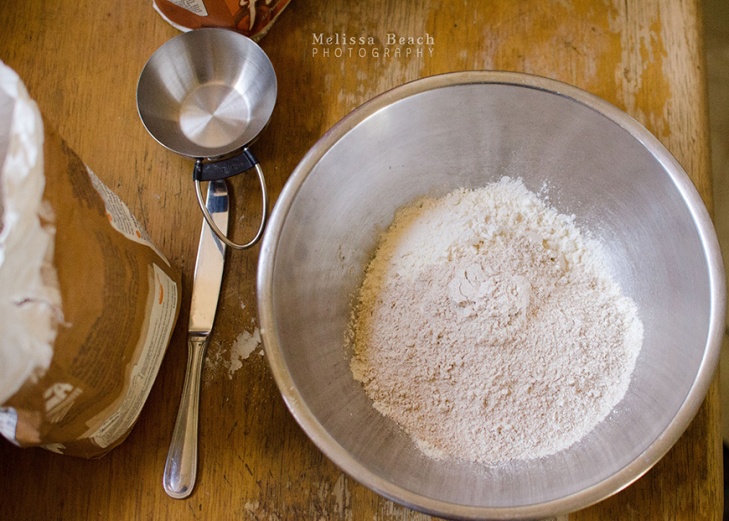 My latest project has been to start making more food from scratch instead of buying it premade from the store.  I slacked off quite a bit on cooking at home during my pregnancy and Gavin’s first year, but that is ok.  Now its time to jump back on the bandwagon.  I took a hard look at my weekly grocery list and found that we spend at least $30 a month on tortillas.  I buy 8 large burrito tortillas every week for about $4.00 plus taco sized tortillas which we use all week for tortilla pizzas, sandwich tacos, cinna/sugar crisps or just to hold last night’s leftovers.  A bag of 20 costs about $4.00. 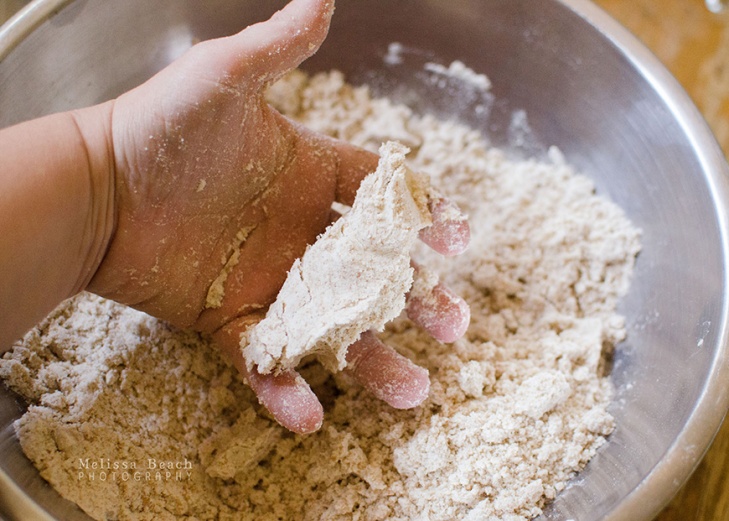 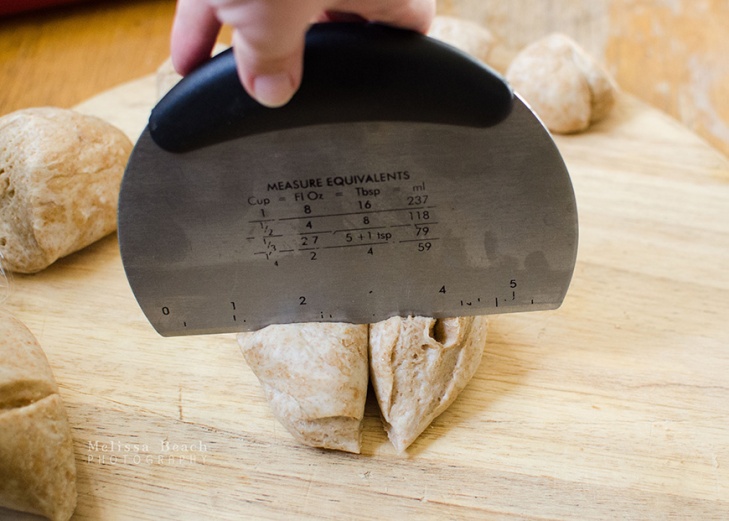 Making your own baked goods is one of the easiest ways to save money on groceries.  Flour, oil, water and yeast are pretty darn cheap and they make up the bulk of most baked goods.  Tortillas are even easier than bread because it doesn’t require much mixing or proofing. 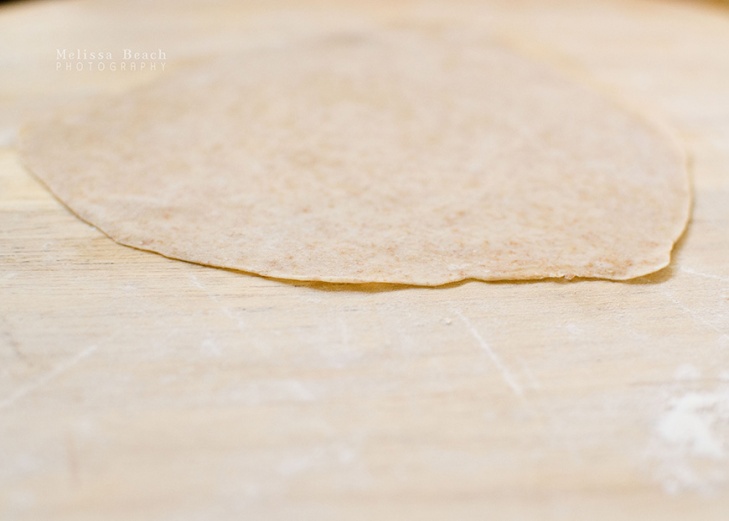 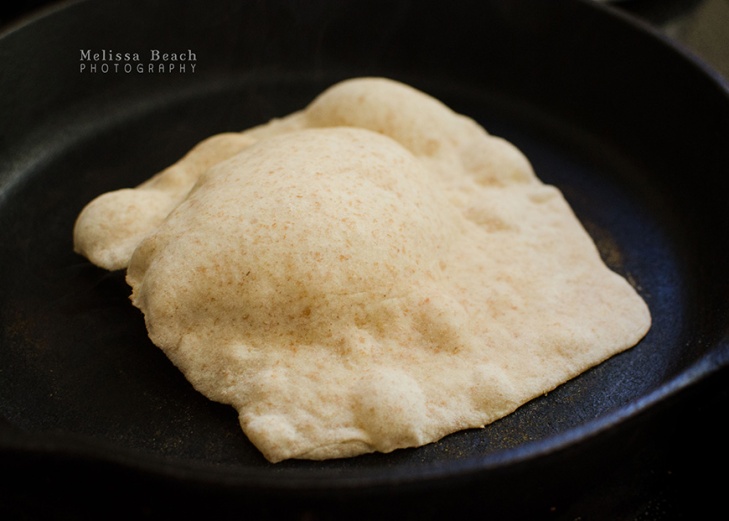 In a large bowl whisk the flour, salt and baking powder together.  Make a hole in the center of the flour and pour in the oil.  Using your fingers mix the oil and flour together until its crumbly.  Gradually add the hot water in while mixing with your fingers until a smooth ball of dough forms.  You may not need all the water.  If the dough is sticky add a pinch or two of flour and knead for a minute until its smooth.  Cover and let it rest for at least 30 minutes.  For a more developed flavor put the covered dough into the refrigerator overnight then take it out to warm up about 30 minutes before you want to cook.

Heat up a cast iron skillet (or regular skillet) over medium heat.  While its warming up start rolling out one of the balls on a floured surface.  You can get a fairly even circle by turning the dough a quarter turn after every roll.  When the pan is hot cook the tortilla in an ungreased pan for 1-2 minutes on each side.  The dough will bubble up but that is ok.  It flattens out when the cooking is done.   Lay cooked tortillas out on a cookie rack to cool.

Roll out the next tortilla while the last one cooks.  It’s easy to get a nice rhythm going.  On a quiet afternoon it gets to be almost meditative.

Store in a ziptop bag.

This week last year : Green Salad with Beet and Carrot

This week 2 yrs ago: No Bake Chocolate Tart for a Happy Husband

Search for a recipe here 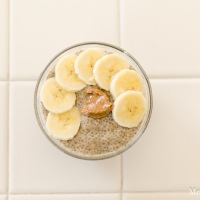 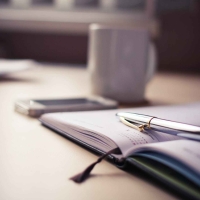 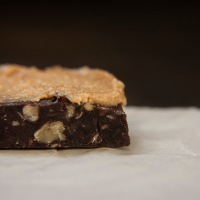 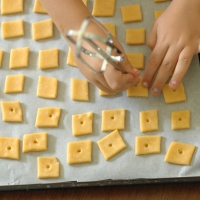 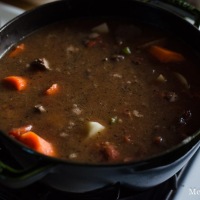 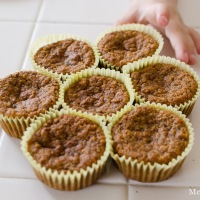 A new leaf sprouted the other day. Anyone else love to check how much it’s unfurled each day? #monstera #monsteradeliciosa #plantsofinstagram #plantsmakespeoplehappy #plantsmakemehappy #plantlover #plantstagram
I bought my first face mask today. I never thought I would ever need one. But here we are. To distract myself I have been spending much of my time with my plants. Looking to see which ones need to be repotted. Which ones can be propagated. Which ones need fertilizing. There are a couple that really struggled through the winter and I want to find a way to give them new life this spring. I have about 8 snake plant cuttings sitting in water with long roots waiting to be planted. I just need to work up the courage to take a trip to Lowe’s. That’s partly why I bought a mask today. It makes me feel safer. I wash my hands and I carry a tiny bottle of hand sanitizer in my purse that I use every time I leave my car. But a mask feels so much better. I’m not unwittingly infecting others and I’m not getting infected. Hopefully. #succulentsofinstagram #zebraplant #plantsmakemehappy #plantsmakepeoplehappy #plantlover #plantssparkjoy #catsandplants
The swiss chard is exploding in my garden ❤️ Anyone have a preferred way to cook it? #swisschard #veggiegarden #plantbased #veggiepatch #veggielover #gardenlife #gardentoplate
Excuse me mister... but that is for fruit. Not for cats. #catsofinstagram #catlife #catsinquarantine #catsrule #catsandplants #catsmakemehappy #happycat #spoiledcat
Made #glutenfreebread today! It turned out so good! The smell is amazing ❤️. #glutenfreebaking
I scored two #rhaphidophoratetrasperma @traderjoes today!! Super excited! It’s been a while since I’ve bought any plants but I didn’t even hesitate to grab the last two of these! #plantsmakepeoplehappy #plantsmakemehappy #plantlady #plantsarethenewcats #traderjoesplants #plantlover #plantshelfie #plantssparkjoy
Really glad I started my garden before all this happened. I found out today that I’m going to be teaching from home until May. Such a strange and unexpected turn this year has taken. I hope you are all self quarantined and are not being foolishly reckless with your lives or the lives of others. It’s important to follow all advice from the CDC as much as possible to avoid unnecessary deaths. Your grandma is counting on you! #springgarden #curlykale
I hope you are all safe and healthy. We are quarantined at home with the exception of an occasional trip to the grocery store or Target drive up. I am likely working from home and homeschooling for the next few months. We have already begun working on our home. Making improvements. Thinking of this years garden. The lettuce is in the ground and we’ve eaten our first harvest. I also had some Swiss chard survive the winter and it growing beautifully. Pictures to come. Stay safe, stay home. ❤️