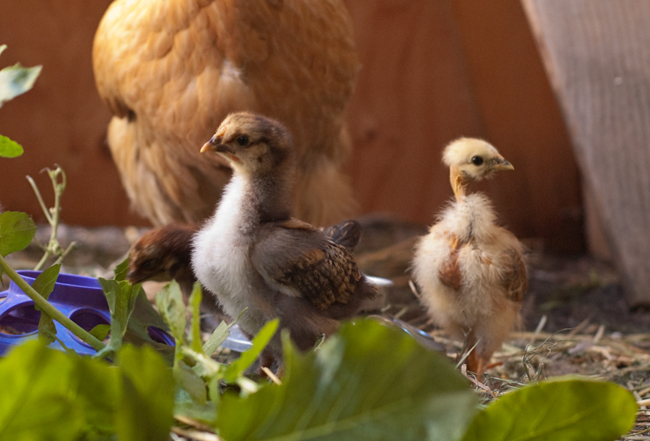 I used to wake up in the morning thinking of the dishes I would have to wash before breakfast or how much I hate waking up alone when Tom has already left for work at 5:30.  Now, I wake up every morning excited and worried if the chickens

I am always hoping that today will be the day the chicks will accept me as a friend.  To tell you the truth, they really don’t need me to do much more than give them fresh bedding, fresh water, and treats.

I used to put stray worms in the garden beds to live out a happy life pooping their way to beautiful tomatoes, now I dangle the poor things in front of chicken beaks.  The longer the worm the better.  Roley Poleys are for bribing the chicks to eat from my hand.  And forget cooking radish tops.  The chickens love them.  To the chickens they go.  Spoiled chickens.

I have always wanted chickens.  I still can’t figure out why.  It might be because they are just so darned cute as chicks.  Every year our family would go see the bins of chicks in the 4-H barns at the County Fair.  At least 100 tiny chirping little baby birds in a low clear bin constantly surrounded by an army of small children.  I was one of those infatuated small children and visiting the chicks is still high on my list of essential fair activities.

I also love anything dual purpose.  Show me a pet that provides me with food and I am sold, hook, line, and sinker.  Tom raised chickens as a kid and liked the thought of Brae growing up with them too.  He called up a coworker who had a small farm.  The guy actually had a couple young chickens that were ready to go and we made plans to pick them up that Saturday.  I spent the rest of the afternoon building a small (and completely free!) chicken tractor out of scrap wood from the garage then spent the rest of the week reading Keeping Chickens by Ashley English.  By Thursday afternoon a mild toothache in Tom’s molar turned into an abscess and we had to call the dentist.  The only day he could fit us in was Saturday.  Delayed one week.

The next Saturday we wake up ready to visit this little farm and collect our new flock.  We called our friend.  The tone of Tom’s voice when he said, “oh man, what happened?” gave it all away.  We weren’t going.

I totally understand why.  The guys wife was bit on the face by a dog and was in the hospital all night.  She is okay, but they needed rest.  Not a problem.  We can wait another week.

Finally Saturday arrives again and we call our friend.

“The hillside near the cows is on fire, but it should be out by the time you get here.  Come on up.”

“Uh, seriously dude we can wait if you are busy.”  Tom looks at me, “This is California, the wildfire state.”

“No, no its fine,” I can hear his happy voice booming from the phone, “Come on down to the farm.”

Brae had a blast feeding the goats, following colorful roosters around the yard, and watching the new filly hide behind her Mama.  The original chicks set aside for us had grown into independent chickens and were not used to people holding them so we opted to get the new chicks that were in a pen with their mama.  Catching them was interesting, one chick escaped through the door and sent us running in different directions trying to corner her.  Then she vanished.  We searched everywhere and just went I was starting to think we had lost her our buddy found the little girl hiding under a pile of firewood. 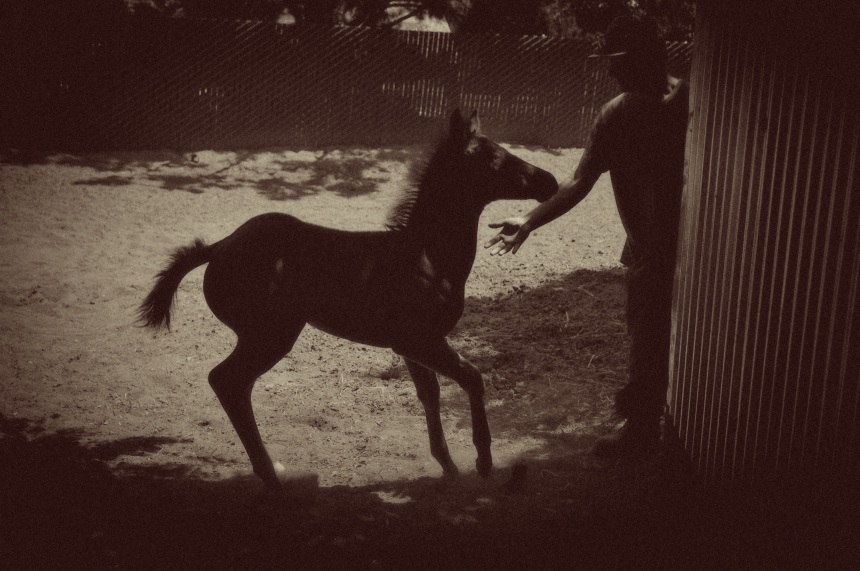 We left the farm happy, tired, dirty and with 5 new family members.

On the way home, Tom and I debated the question of which came first, the chicken or the egg.  We finally agreed that because of evolution the egg wins.

2 replies to Little Chickens in the City